October 12, 2017
Moonalice played a short but very sweet set on the Towers of Gold Stage at Hardly Strictly Bluegrass on Saturday 9 October. A cover of the Beatles’ classic, Revolution, was the entrance to a forty minute emotional oasis, and for the duration, the reassurance that in an increasingly challenging world, ”It’s gonna be alright.” 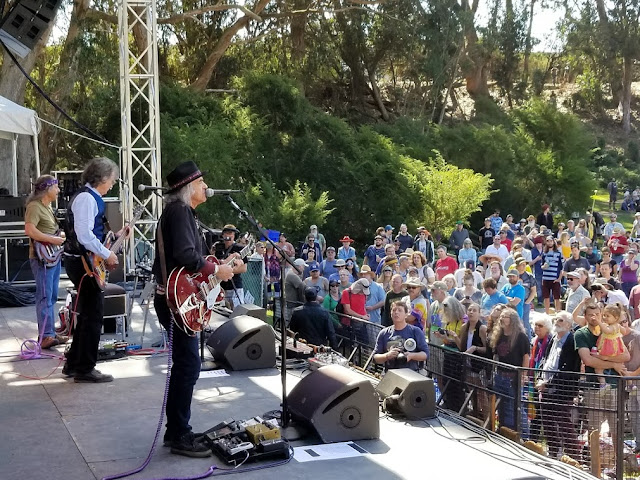 This Facebook post from Matt Fowler, long-time Moonalice fan aka member of the Moonalice Tribe, very nicely describes the band and their #HSB17 set:

Moonalice is a San Francisco based psychedelic roots-rock band which began ten years ago in San Francisco as a group of "seven different musicians who all want to play bass." This included Jack Casady and G.E. Smith, but since has trickled down to a four-piece. John Molo has been called "a personal God" on drums by Phil Lesh. Pete Sears has been on more amazing records in your collection than you knew you even had. Barry Sless is simply one of the most amazing guitar and pedal-steel players on the planet, bar none. And Roger McNamee, well, he's the glue that holds it together. With every show I have ever seen them play Roger gets better and better, and he was pretty good to begin with. In their 40-minute set, they only had time for five songs, because they play long. Today's set: 'Revolution,' 'Love Will Take You Home,' 'High Five,' 'Stella Blue' and 'Tell Me It's Okay.' You can listen to every show from their archives of over the last five years at moonalice.com.

Enjoy the videos of some of the songs from the set, below! You can watch the full set here. Enjoy!