July 24, 2017
As California gears up to allow recreational cannabis sales, startups are jockeying for a bite of the state’s growing marijuana edibles market by going upmarket, and by adding cannabis to everything from traditional munchies, to iced coffee, pastilles and breath mints. 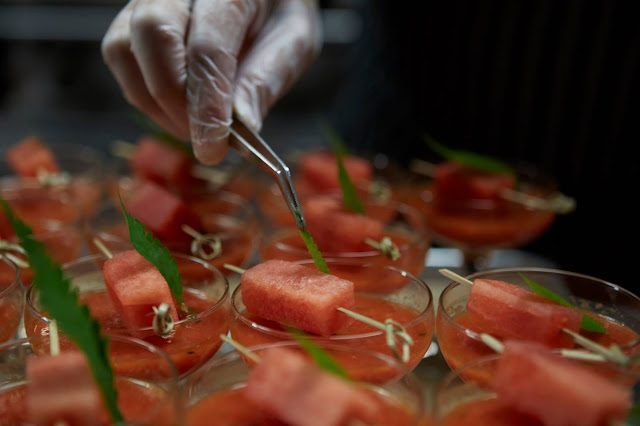 According to Arcview Market Research, a research and investment services firm focusing on the cannabis businesses, it’s an industry that barely existed out of home 10 years ago, but that now shows no sign of slowing down. The company estimates that California customers consumed about $180 million worth of edibles last year - about 10 percent of the state's overall legal cannabis sales which are expected to grow more than 25 percent annually to hit $5.8 billion by 2021.

Trends in other states suggest that the edibles market will continue to grow in California as the state’s recreational cannabis sales start. Sales of cannabis-infused treats increased 121% last year in Washington state, where recreational cannabis is legal, according to cannabis analytics firm Headset Inc., while in Colorado, according to Arcview, sales of edibles more than tripled from $17 million in the first quarter of 2014 - when the state first allowed recreational marijuana use - to $53 million in the third quarter of 2016.

California's edibles market is diversifying, with companies adding healthy, organic, vegan and gluten-free options to their product lines, and making low-dose edibles for new patients and people who want to medicate while at work or at home with their kids.

Oakland-based Kiva Confections was one of the early pioneers of microdosing with its low-dose chocolate-covered espresso beans and blueberries containing just 5 milligrams of THC. When those became Kiva's best-sellers, the company decided to go even lower - coming out with 2.5 milligram mints. For comparison, Christie Strong, Kiva's marketing communications manager estimates a pot brownie at a Grateful Dead concert could have anywhere between 50 to 500 milligrams of THC.


San Francisco’s Ritual Roasters and local edibles startup Somatik are bringing cannabis-infused coffee to the Bay Area. Somatik cannabis cold-brew is an eight-ounce bottle of coffee that contains THC. According to Christopher Schroeder, founder of Somatik, this product contains less cannabis than most infused drinks on the market.

A caveat for prospective canna-entrepreneurs and startups, though. As California finalizes its marijuana regulations, Arcview warns that edibles startups will face added food safety hurdles that their peers in other cannabis industries, and in the general foods market, don't have to navigate.

The reason for the explosive growth is that as the pot market expands, it’s starting to reach people who prefer not to smoke – the overall the smoking rate of cigarettes among adults is down from 20.6% in 2009 to 16.8% in 2014. Edibles provide a discrete, smoke-free experience, and since they can command higher prices, often accounting for 25 to 60% of a dispensary’s profits, this is making edibles an appealing – and growing - slice of the pot pie.

Pot-laced mints containing as little as 2.5 milligrams of THC, the chemical compound in marijuana that makes users high, began showing up on dispensary shelves late 2016, and are said to be gaining favor among users who want to avoid smoking or over-dosing on edibles. Breez mints which are made with oil derived from the marijuana plant, sugar, and peppermint oil, were introduced earlier this year and are said to have positive user feedback. Each mint has five milligrams of THC, the rough equivalent of smoking one-fifth of a joint or less.

The bag containing the cannabis munchies is increasingly likely to be from a well-known designer as opposed to a well-known kitchen brand. Treats are going gourmet, for example, Beboe, a cannabis brand targeting the luxury market, that launched in San Francisco at a "Cannabis Cotillion" in June this year.

Also going upmarket are the cannabis tastings and cuisine created by gourmet chefs - such as Jeff the 420 Chef aka “the Julia Child of Weed" - at the recent Norcal CannaCuisine Gala organized by cannabis entrepreneur, Elise McRoberts. Hosted at a private space within Sonoma County, 150 guests enjoyed hand crafted creations and canna-cocktails while rocking out to San Francisco psychedelic band Moonalice fronted by advocate for cannabis reform, Roger McNamee. Each cocktail and course during the meal ranged from 1.5 - 3 milligrams of cannabinoids, with precise dosage provided for guests on the menu.


In Los Angeles, the Beverly Hills Cannabis Club promotes “couture cannabis” with cannabis tastings, cannabis yoga retreats, secret speakeasy-style cannabis parties, cannabis-infused cosmetic products and a green cannabis juicing line – on point with a study that has identified cannabis beverages as one of the five trends for the future of the food and drink industry.