October 05, 2017
Hardly Strictly Bluegrass (HSB), arguably the greatest free concert on the planet, returns to Golden Gate Park this weekend with another incredible roster of performers, and with Randy Newman, Lucinda Williams, and Dan Auerbach of the Black Keys headlining. 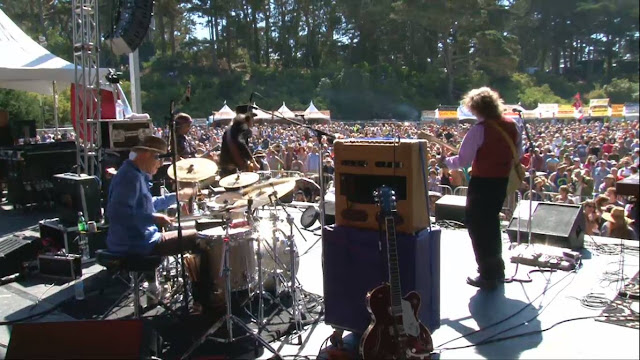 Since it’s free, no tickets are needed for this BYOB music festival, which will have more than 50 food and drink vendors on-site. Over 90 live music acts will perform across seven stages throughout the weekend.

As part of the organizers ongoing work to green HSB, they will not be offering printed materials in the park this year.  Festival goers are encouraged to download the app which includes everything that they will need. #HSB17 is the hashtag!

A privilege to play

Getting to play at all is a privilege…getting to play a big gig like HSB is just really something else,” said Roger McNamee of Moonalice whose set will be on Saturday at 12:20pm on the Towers of Gold Stage. “There’s a guy named Warren Hellman, an investor who was just really successful.  His philanthropy has been all about making San Francisco a better place to live…so we can go see the arts, have an education, enjoy the parks and things like that.  When he died, in his will he left a trust to support the Bluegrass Festival, which he has been paying for since it started fifteen years ago.  He pays 100% of the costs so it’s free to everybody.”

“I think he initially did it so he could give the biggest payday of the year to his heroes in the bluegrass world.  So it was Doc Watson, Earl Scruggs and people like that,” Roger continued, “He would have them out, give them a huge pay day and have them play in front of their biggest crowds of the year.  Then the thing morphed into something that was bigger than just bluegrass…and became “Hardly” Strictly Bluegrass.  When that happened we  - Moonalice - started getting invited, and it is pretty special.  There’s a ton of great festivals out there, and if you’re in a band getting to play at a festival is really an awesome thing.  It’s just a great vibe, being at a festival.”

Every who attends the Moonalice set will receive a set of three posters from leading Bay Area poster artists. Left to right by Stanley Mouse, Chris Shaw and Alexandra Fischer. 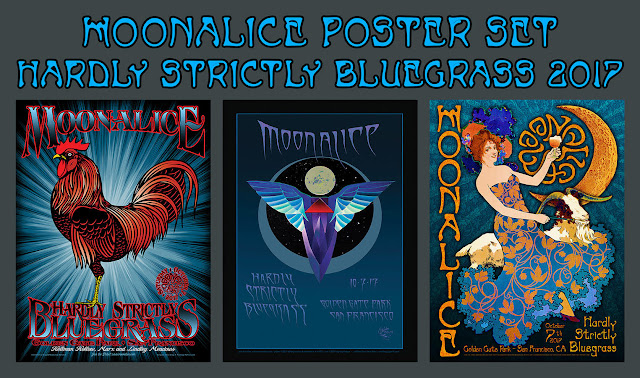 
Streaming of HSB is provided by Moonalice on its live video platform, in partnership with Chime Interactive - with streaming from participating artists from four stages this year: Banjo, Rooster, Swan and Towers Of Gold. Links will be provided as these become available.
Alexandra Fischer Chris Shaw Hardly Strictly Bluegrass HSB17 Moonalice Stanley Mouse Warren Hellman